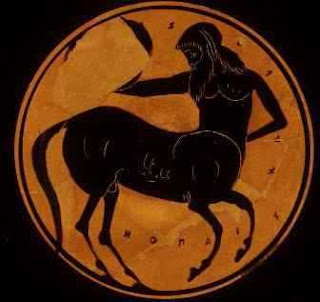 The centaur portrays something significant about our horsemanship desires. That primal mythological being displays the metaphoric equestrian ideal; head, arms, and torso of a horseperson blending gracefully into the body and legs of horse; Equus sapien. Those who ride horses understand this conceit clearly; become the horse. Sophisticated Thessalonian Greek tribesman imagined and mythologized this man/horse creature, a cultural reflection of man’s emotional and physical blending with the species Equus caballus. The centaur image expresses pastoral man’s exalted and cherished blending with the horse. The centaur defines the willing partnership many of today’s horsemen seek.
A current expression of the centaur is what some term natural horsemanship, a renewal of the manifestation of our desire to connect with horses in a willing and conciliatory fashion. Ethical horsemanship...training that is a good deal for the horse, including the husbandry and essential social development and enrichment. More than ever, as mankind has drifted ever so far from nature, people seek true unity with their horses, harmonious partnerships based on understanding and mutual confidence rather than force or coercion. Horsemen hope their horse allows total control willingly and readily—dependably, consistently, and reliably—wherever and whenever they ride together. The connection horsefolk seek is empowerment from the horse, a controlled extension of their self. The ideal connection is a pairing achieved willingly, a partnership that becomes something much more than the sum of man and horse. 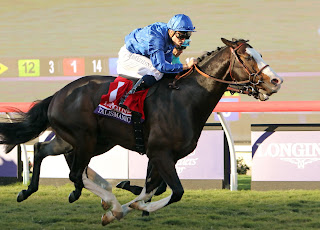 Man continues to renew and refine the relationship that has bonded him to horses for millennia. Horsemen continue to seek a connectivity of their minds to the horse’s body as horsemen always have. The horsemanship ideal remains the same through time: that a rider’s thought becomes horse’s action, the centaur effect. Indeed, modern horsemen report that horse/man relationships approach this ideal with regularity. The nature of the horse, however, is such that the regularity remains uncertain.
Consistent blending of man’s thought to the horse’s physique requires a thorough and multifaceted understanding of the horse’s nature. Subsequently, the development of an ability to communicate physically with horses is required to connect with horses in a positive fashion. Kinetic empathy, or understanding through movement, describes the gesture language used between horses, and between horses and humans. The language of horsemanship is the language of kinetic empathy. An acceptance of the time it takes to refine relationships with horses remains an important aspect of communicating with horses. Horsemanship involves more than training. Horses form strong pair bonds in a herd to develop fluent communication between horses to facilitate group survival. Group survival is the horse’s nature, and the horseperson needs to take the time to develop a familiarity with horses, both on an individual and general basis. Horses need to know how those in their group move, and respond to their  movements, and as well the horseperson needs to know equine locomotion on many levels. Understanding and comprehending the kinetic empathy that horses utilize involves appreciating the gaits of horses. Horsemanship involves bonding, becoming familiar with one another, as is the horse’s nature. Much of this bonding is the blending of a physical connection. Pleasing matches take time spent together.
The connection between horse and man is subconscious and conscious, inherent and acquired. Advanced horsemen and horsewomen communicate to and with horses on many levels, much as horses communicate with one another. Awareness in both species becomes comprehensive as the relationship develops, with both man and horse knowing the movements of the other, as well as the other’s expected responses to their movements.

Man’s relationship with the horse has been pressing for some time. Mary Leakey discovered early African man’s footprints fossilized next to the hoof-prints of an early African horse. These hoof and foot prints next to one another dated 3.6 million years into the past. That is a long time ago. Man and horse have spent a long time coevolving. Before merging together in the dance of domestication, man and horse developed group survival strategies that involved sophisticated social interaction and communication. Much of the early communication in mankind involved gestures. The majority of horse communication involves gestures and body language, acknowledgements and responses to movements. Horse and man’s ability to communicate merged in the domestication process. Mankind has spent a long time coevolving with horses, and here we continue to refine our interspecies communication and understanding of one another. 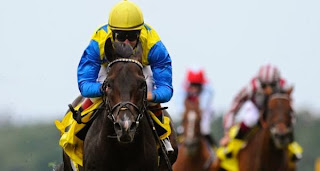 
Dr Gustafson graduated from Washington State University as a Doctor of Veterinary Medicine in 1979. He is a practicing veterinarian, animal welfare journalist, equine behavior educator, and novelist. The application of behavioral science to the husbandry of horses enhances optimal health, performance, soundness, contentment, and longevity. Behavioral, social, locomotory, and nutritional strategies enhance the prosperity, vigor, and health of stabled horses. Sid offers veterinary care, training, husbandry, and conditioning from the horse's perspective to achieve willing and winning equine partnerships with humans.
Posted by Sid Gustafson DVM at 5:44 PM