Blame Is King for a Day 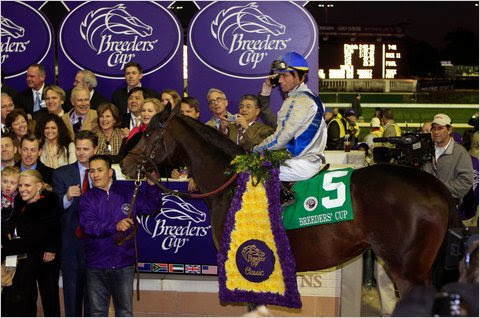 No Longer Perfect,
But Still a Champ

The talented mare Zenyatta is the people’s champion and is worthy of Horse of the Year honors, writes Joe Drape.
Blame the Queen’s loss on the earplugs, she could not hear the beckoning call of millions. Blame the win on a great conditioning job, a great ride, and a great horse for the course. Blame the win on Al Stall’s superior grade of straw and water, on his special brand of racehorse enrichment, on his ability to deliver a perfectly conditioned and prepared horse. Blame the win on Blame.
Blame the loss on the trainer for not properly generalizing and habituating his horse to dirt in her face. Do not blame Mike Smith, as his horse was not prepared for what she encountered at Churchill Downs. It is the trainer’s responsibility to totally prepare the horse. The Queen did not like dirt in her face, and that is not the jockey’s fault. Zenyatta had to acclimate during the race, and did, albeit a bit late. She had trouble transitioning into the right lead coming out of the turn into the stretch, as she was pinned in tight with a rough, tough crowd of runners. Any factor could have moved up a head, but the sweet trip belonged to Garrett Gomez.
Blame it on horse racing. Blame it on that horseperson waiting in the wings to rise out of the dust with his horse, the one who discovers what makes the willing partnership click for the big race.
Blame it on Gomez for staying out of his horse’s way. Blame it on appropriate socialization, as Blame (and Zennie) were taught by other horses to run at speed in close company by other horses in their growth and development. They were taught the confidence to run through and past other running horses by their dams, and run by and through horses they both did. Did you see Blame pin his ears at the goddess of Zen at the finish line? saying, “You may be the greatest, Queen Z, just not today.”
No need to Blame anyone, really, other than the Sport of Kings, and these days, the Sport of Queens. Blame showed up with little to lose, and lost nothing at all. Zenyatta showed up with everything to lose, and lost nothing other than a horse race.
A stellar performance by the entire field. There is no alpha in the world of horses or horse racing.
Posted by Sid Gustafson DVM at 8:04 AM No comments: