The Fictional Approach to Veterinary Ethics

“Wolf is in me.”   Artemus Valerone DVM 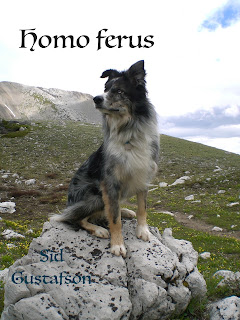 I go to see Dr. Valerone once a week these days. They have limited my visits since I brought his dog to him, as if an animal has taken my place. Before, when I went everyday, he knew me, counting on me to be there daily. Recently he does not recognize me so readily, seeing me only once a week. And now with his dog to care for him, and he her. Nonetheless I continue to come. I hear more and more of his story of how he arrived here. He warns me about being a doctor, how it came to be for him.
Earlier, when he first was admitted, things were much rougher, hopeless at times. But that was before his dog living and being with him here became an actuality, in large part due to my rational efforts and yes, in the end, bribes of sorts to the psychoanalytic staff of self institutionalized social deviants that run the place. Psychoanalysis, psychotherapy, psychopharmacology, all things psycho had failed to bring him on the mend. But he is on the upswing now, I know. I convinced them dog is his likely remedy. When she arrived the animal psychodynamics began, healing ensued.
I arrive early this day and sit in the phenolic visitation lounge next to him and begin to listen to his bemused dialogue. It is one of those large white rooms that was originally designed to express opulence, probably built around the time of his birth. The tall venerated ceiling hangs a mesmerizing fan that minces his words, whiffing and whirring on as if it may dislodge to spin down and decapitate us. Wobbled wafts of disinfected air pass through his articulation. The room’s incarcerated sterility is cheated by old soft leather armchairs. I sink deeply in mine, Valerone is poleaxed in his with eyes drawn out the metal matrixed window, talking. On the wall is a Vincent van Gogh reproduction, crazy flowers conceal distorted stars. This must be the lend me your ear room. Dr. Valerone’s gentle, soft voice perambulates in muffled echoes through the room and down the old halls. His soft vocals and averred inflections reverberate the story again through my spine, circuitously it trickles, sometimes jolting my mind. He tells me he is crazy, but I really don’t think so.  I have grasped his nature at last, at long last. He’s not crazy, if he was he is not anymore, but still he insists on his dementia, if these other folk are sane, then for him insanity will do him rightly well; he reiterates;

I went insane you know. I don’t remember if it was what happened with the animals or if it was something organic in me that was the cause. I’m not sure, perhaps it was the war. Maybe it is simply the animal in me that is jilted. In my college days they called me Kodak. “Hey Kodak,” they would ask, “where's the insertion of the semitendinosus?” Whatever the question, once I had heard or seen it, I knew the answer. I remembered everything I saw or heard, read. A photographic memory, we all have it, my ability to recall is just a bit more vivid than most. In the end that faithful memory was my demise, a memory too lucid. Therein lies my trouble, graphic photographs in my mind of how things once were at times for animals, still are. Had I left the veterinary field, I would still be out there. But no, I stayed. My memory never went away. The animal in me lingers, thirsting now for spontaneous freedoms. 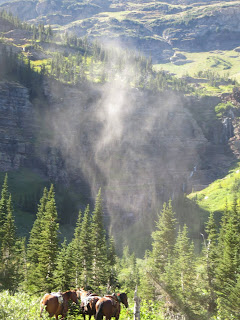 Dr Gustafson is a practicing veterinarian, equine behavior educator, and novelist. The application of behavior science enhances optimum health, performance, soundness, contentment, and longevity in animal athletes. Behavioral and nutritional strategies enrich the lives of stabled horses. Training and husbandry from the horse's perspective result in content, cooperative horses who are willing to learn and perform.
Posted by Sid Gustafson DVM at 11:58 AM No comments: